The Welsh Liberal Democrats and Independents official opposition group on Swansea Council are to table a number of amendments to the council’s budget on Thursday to scrap the proposed £50 a day charge for attending day centres in the City, to put more money into repairing roads and to try and protect under threat youth clubs. 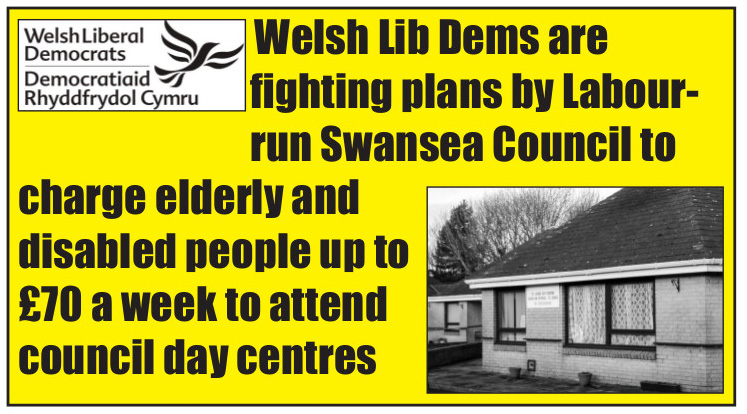 Commenting on the amendments, Opposition Leader, Councillor Chris Holley said many people who rely on these day centres for companionship and care will be put off by the charges, leading to a number of the centres closing:

“It was only a few years ago that proposals were being mooted to close some of these day centres,” he said. “this charge could put enough people off attending them so as to bring about that outcome by default. I am concerned that those older people and younger adults who rely on these centres for care, support and companionship and whose attendance can give much needed respite to their carers, will no longer be able to afford to attend. In addition a council consultation found that nearly 75% of respondents were opposed to the charges.

“Even with means-testing it is likely that we will see a fall-off of attendance at day centres. In my view the council should abandon these proposals. They are unjust and are targeted at a vulnerable group of people who may lose services they depend on as a result.

“I am also concerned at proposals to close a number of youth clubs. There is little enough for young people to do as it is without withdrawing further facilities. When we questioned the cabinet member on this, he told us that youth provision was being reviewed to ensure that it was appropriate. That is fine, but let’s not prejudge the outcome of that review by closing youth clubs before it has reported.

“Like many people in Swansea I am concerned at the condition of our roads after a wet winter. We accept that there is a very successful pothole task force and that more money is going into this but the problem is so huge that the council is still not doing enough. I believe that spending an extra £450,000 on planned maintenance is more urgent than using the money to carry out a study to assist the future redevelopment of the Civic Centre, which may not happen for many years ahead.

“I believe that all these amendments are reasonable and hope that they can be supported.”

Note: The amendments are as follows:

In the General Fund capital budget defer the £200,000 for Civic Centre Relocation and the £250,000 for Civic Centre Contingency to 2019/20 and reallocate the released £450, 000 for 2018/19 to additional road and pavement maintenance. The overall increased capital programme for 2019-20 of £450,000 and its capital financing (by way of increased unsupported borrowing) to be considered as part of the 2019-20 revenue budget setting