The Swansea and Gower Liberal Democrats have announced our candidates for this years’ Senedd election who will be lead by top regional candidate Chloe Hutchinson who will be standing in Swansea West. Local campaigner Sam Bennett has been selected to contest Swansea East, while local activist Dr Mike Sheehan has been chosen for Gower. 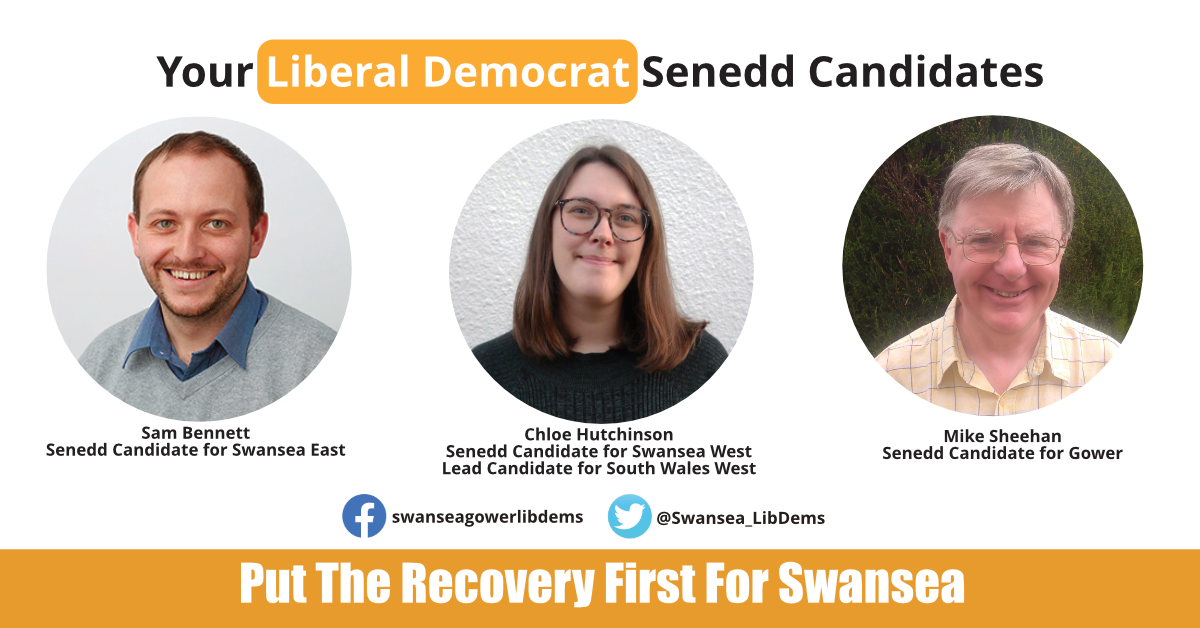 Sam, originally from Reading, moved to Swansea having worked for Welsh Lib Dem Education Minister Kirsty Williams MS and then going on to work in Marketing and Communications for Swansea University. He stood for the European Parliament in 2019 and was the Welsh Lib Dem candidate for Gower in December's General Election, in both cases achieving the best result for the party in over a decade.

Born in London, Mike’s dad was from Merthyr and he now lives with his wife Cath in Penclawdd having recently retired from a distinguished international relations academic career. He was a Professor at Swansea University and started his academic career in Aberystwyth, before moving to become a Professor at Aberdeen University in Scotland. In his spare time, Mike plays guitar and loves to walk on the Gower.

"I am proud to be part of a strong team of Welsh Liberal Democrat candidates, standing up to demand better for our communities and for our vision of a fairer Wales.

“People across Swansea East deserve an MS who will listen to their concerns, be available and take action.  At such an important time, both globally and nationally, the decisions we make now will have profound implications for Wales for generations to come.

I believe that Wales has an opportunity to be at the forefront of a new Green Deal, investing in renewable energy technology such as the tidal lagoon and rebuilding our nation.

Too many in our communities feel forgotten and left behind. As the Member of the Senedd for Swansea East I will work tirelessly to give people hope for the future.”

“I am motivated by a desire to heal the divisions in our society and to help bring communities back together by tackling the burning injustices we face.

With greater polarisation gripping our country, I believe that now, more than ever, our core values of equality and community are key to creating a fairer society.”

"I am really proud to see a strong team of Swansea and Gower candidates for Senedd election next year. Sam, Mike and I are all passionate campaigners - who want to be outstanding champions of our communities.

This election comes at a pivotal time for Wales. The outcome will decide how we reshape our society and what direction we take our country as we enter this brave new post-Covid world.

We are committed to fighting for a fairer and more just Wales, one where everyone has both the opportunity and support that they need to succeed. If that is what you want too, then join the Welsh Liberal Democrats and help us turn that vision into reality.”